Tutorial system works but could be improved, undergraduates say 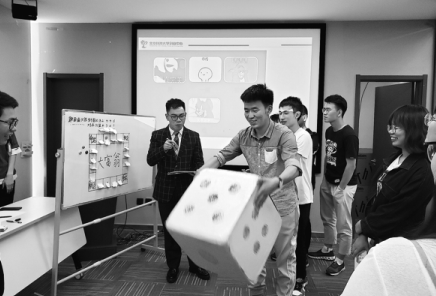 A tutorial system for undergraduate students has received mixed reviews after it was launched by the University of Science and Technology Beijing in October 2018.

A symposium was held in November by the university to review how the program has progressed and what has been achieved in its first year of operation.

Song Bo, provost of the university, notes that the pass rate for compulsory subjects has risen among freshmen from eight out of the total 13 undergraduate schools last year.

And over the same period of time, undergraduates' participation in academic competitions or innovation and entrepreneurship events grew remarkably. For example, the number of participants in the Student Research Training Program, which encourages and sponsors innovative research conducted by undergraduate students, has increased from 2,631 to 3,595, with nearly half of their projects being instructed by their tutors.

Qin Zijie, a sophomore from the school of metallurgy and ecological engineering, says he benefited a great deal from frequent meetings with his tutor Feng Kai who pushed him to attend class regularly and on time, finish assignments independently and actively pursue extracurricular activities.

Under Feng's academic instruction, Qin participated in an exchange program between Japan's Tohoku University and the USTB in March where he presented his research report on computer simulation in manufacturing at steel mills.

"Feng also shares his personal experience with me to show how he improved learning efficiency and planning for a future career, which I found very helpful for coping with difficulties I faced in both study and in life," says Qin.

However, he also noticed some shortcomings in the tutorial system.

"Generally, we undergraduates have to put many courses on our schedules and the tutors also live under the stress of both teaching and carrying out scientific research. Hence, it's hard to fix a time when we can meet the tutors," he says, adding that some students might be held back at the end of class to talk with their tutors.

"To solve that problem, I think we could ask some schoolmates who have actively communicated with tutors to share their experience online. This might motivate their peers to take advantage of the program," Qin adds.

Sun Zhihui, an associate professor at the school of mechanical engineering, is now tutoring 11 undergraduate students.

From his perspective, different approaches should be used for students at different stages of their university journey.

"The teachers should help freshmen fit into campus life at the USTB by introducing them to the key subjects of their majors and urging them to build up a strong ability for self-study and make a clear plan for the future," he says.

For sophomores, according to Sun, the emphasis of tutoring lies in encouraging them to participate in various innovative and competitive events and coaching the students who failed certain tests in the previous semester.

"I also hold academic salons or sports activities where my senior and junior students can come to play and communicate with their younger peers. That creates an atmosphere full of solidarity and fraternity for the group of students I am mentoring," says Sun.

The tutorial program is obviously not a new thing in China as, in recent years, it has hit the campuses of many universities across the country, including Shanghai Jiao Tong University, Ningbo University, Shandong University and University of Chinese Academy of Sciences.

Yang Renshu, president of the USTB, highlights that implementation of the program should be thorough instead of formulaic to finally attain its goals, including improving the students' pass rate, increasing their eagerness to pursue further education, helping them grow into well-rounded people as well as achieving social satisfaction for the university.